Living and working in a European culture capital

Temporary housing in the City of Mozart

Work-related change of residence, house renovation or temporary employment during the Salzburg Festival: Whatever your reason to spend some time in Salzburg, we have all accommodation details for you. Without a doubt, the City of Salzburg is an expensive place. However, with KURZZEiTmiete it’s easy to find temporary accommodation at an attractive price and in the district of your choice.

Why should you rent an apartment in Salzburg?

Salzburg is one of Europe’s culture capitals – not least thanks to the world-famous Salzburg Festival. Apart from the renowned festival, the City of Mozart offers numerous theatre performances, operas, concerts and a wide range of historic places and sights. Hohensalzburg Fortress, Salzburg Cathedral, St. Peter’s Abbey, Residenz Palace, Mozartplatz square, Getreidegasse, Mirabellplatz square … the “Historic Centre of the City of Salzburg”, an UNESCO world heritage, is home to many world-famous sights.

All apartments in Salzburg

Our holiday flat has 68 m² living space, a terrace with 12 m² and has therefore space for...

Villa Elli is situated in the City of Salzburg near the Shoppingcenter Europark in a quiet area....

Apartment in a newly renovated turn-of-the-century villa in the central old town. Can be given to...

The 2-room apartment is located on the outskirts. A district named Aigen which is located at the...

The small apartment has everything you would expect of a good hotel room. The sofa can be...

Newly renovated 2 room apartment on the ground floor of a charming farmhouse on Moosstrasse in...

This 2-room apartment for short-term living offers all the amenities a temporary tenant needs. You...

This bright and welcoming appartement is located to the green inner courtyard.

shared flat, own room in an ideal city location. Located between Mirabell and the main train...

Excellent appointed 2 room appartment Gnigl with a view to the Gaisberg. Perfect connection to...

This 3 room apartment will be rented for the first time after completion in march 2021. Fully...

The 400 years old historical building is situated into one of the oldest alley of Salzburg. When...

Newly renovated and decorated apartment in a calm neighbourhood. It is very close (15 minutes by...

Fashionably furnished and newly equipped garconniere in the heart of Salzburg, perfect for the...

Attractive short-term residential property in an ideal geographical location not far from Salzburg,...

New renovated, bright apartment in the heart of Salzburg

Located in the heart of Salzburg and perfect for 2 people. The apartment is newly renovated, bright...

Central cityapartment situated next to the oldtown of Salzburg

This city apartment has all the amenities that a short-term tenant needs! The short-term apartment,...

Cityloft with balcony to rent on time

This quiet apartment was completely renovated in July 2017 and newly furnished. The location in... 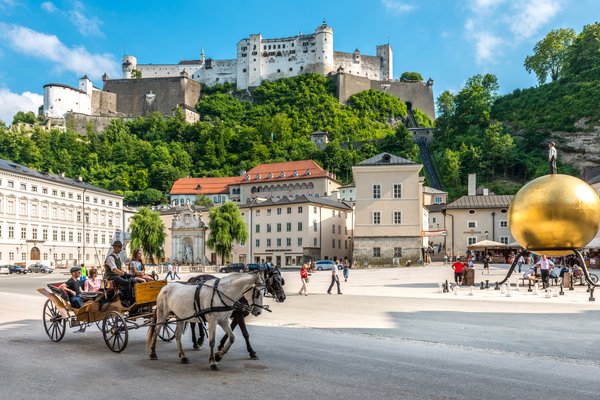 Austria’s fourth-biggest city encompasses 24 districts, with the Old Town, Mülln and Nonntal making up the historic centre. During the course of the years, other city districts like Riedenburg, Neustadt, Elisabeth-Vorstadt and Lehen began to grow around the centre. Subsequently, the districts of Parsch, Aigen, Gneis and Itzling became part of the city, followed by the villages of Maxglan, Liefering, Leopoldskron-Moos, Gnigl and Morzg. The latest addition to the city’s districts was the Salzburg-Süd area with Josefiau, Herrnau and Alpensiedlung, followed by the villages of Langwied, Kasern, Schallmoos and Taxham.

24 neighbourhoods and 24 reasons to look for temporary accommodation in Salzburg!

The highest average rents can be found in Mülln, Nonntal and Aigen. In comparison, the most affordable apartments are mostly located in Lehen, Taxham or Schallmoos. With short-term rental apartments, the price largely depends on the amenities the respective object offers, though. You wonder what the most popular neighbourhoods of Salzburg are and why? KURZZEiTmiete helps you find the perfect district for your needs!

In close proximity to the historic city centre, Mülln is Salzburg’s most expensive and most popular district. North of the Old Town, Mülln is located at the left shore of the Salzach river. In the west, the district borders on Lehen, in the south and southwest, it is adjacent to Riedenburg and Maxglan, respectively. Thanks to the suburban train station “Mülln-Altstadt”, it’s quick and easy to get to the main station and subsequently to Germany. In addition, Mülln is connected to the rest of the city by various bus lines.

When it comes to renting a short-term apartment in Salzburg, the Nonntal district to the south of the left Old Town is another popular choice. You’re looking for temporary housing in a world-heritage city? KURZZEiTmiete offers a wide range of furnished apartments in the inner Nonntal district. Despite housing some of Salzburg’s most important cultural institutions such as the ORF Salzburg headquarters, ARGE-Kultur and the Schauspielhaus im Petersbrunnhof theatre, the district has kept its village character.

Thanks to the nature reserve of the same name, temporary housing in Leopoldskron-Moos is something special. The neighbourhood is characterised by a low population density, particularly along the left and right side of the four-kilometre Moosstraße in the west. In the south, the district connects with the Tauern motorway and the city border, in the north it borders on the Riedenburg district.

Located between the Salzach and the city’s main station, Elisabeth-Vorstadt is a central and urban neighbourhood of Salzburg. On the one hand, the district’s close proximity to the train station results in affordable apartment rents, on the other hand in a top-class infrastructure. The southern part touches on the UNESCO world heritage. You’re always on the go and rely on short distances and quick connections? Then the Elisabeth-Vorstadt district is the perfect choice to find a short-term rental. 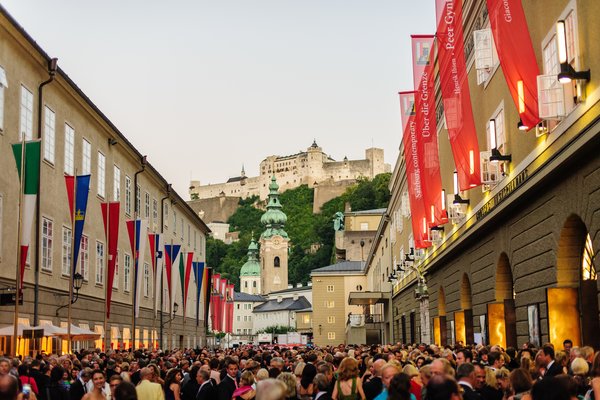 If you enjoy being right in the middle of things, Salzburg’s Old Town is the proper choice for your temporary accommodation. Getreidegasse, Residenzplatz square, Alter Markt square, Steingasse and Linzergasse are the best known and most popular spots of the historic centre. The district’s central location means that there are limited parking spaces and restricted access options, but residents (also with a second residence) benefit from special monthly tickets for the Mönchsberg parking garage. Please note that these tickets are not available during the Salzburg Festival. Talking about the famous festival: During the “Salzburger Festspiele”, this city district is extremely lively. If this is what you’re looking for, the Old Town is your district of choice.

Porsche, Piech, Beckenbauer, Thyssen-Henne: The names of some of Aigen’s more famous residents are indicative of the district’s elevated price level. The neighbourhood is dominated by Aigen Church, Aigen Palace and Aigen Park and dotted with numerous mansions and exclusive residential complexes. What makes this district so attractive as a temporary residence? The nearby suburban train station as well as bus lines 6 and 7 that perfectly connect the partly rural district with the city centre.

In close proximity to the Old Town, on the opposite side of the river Salzach, lies the Neustadt district. Also known as the Andrä district, it borders on the Mirabell Gardens to the south, one of Salzburg’s top attractions. To the west, stately homes are lining the shores of the Salzach. Franz-Josef-Straße and its parallel streets are parts of the fringes of the UNESCO world heritage. Small markets, restaurants and cafés lend this neighbourhood its distinct charm. Convenient for short-term tenants: Neustadt is close to the main train station as well as to the city centre.

A quiet neighbourhood at the foot of the Gaisberg, Parsch is another popular choice for temporary housing in Salzburg. The district is characterised by detached and semi-detached houses with spacious gardens, by plenty of mansions and by Flederbach Palace. Parsch is also home to Volksgarten park with the public swimming pool of the same name and the ice arena of EC Red Bull Salzburg. Thanks to the suburban train station, the main station can be reached in less than ten minutes. The nearby municipalities of Elsbethen and Puch bei Hallein can also be reached in just a few minutes. What’s more, there are several city busses connecting Parsch to the city centre.

To the south of the Old Town, you can find other top-class, particularly green neighbourhoods like Gneis and Morzg. In addition, the Riedenburg and Maxglan districts to the east of the historic centre have gained in popularity over the past years as well. Thanks to their convenient connection to the suburban train network, the region to the north of the Old Town, reaching up to Anthering, offers a great alternative at the outskirts of Salzburg. The area surrounding Hof and Faistenau is an attractive choice as well if you have a car. 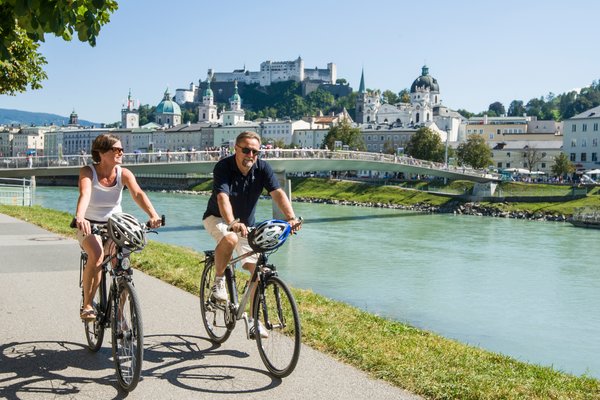 Short distances and excellent connections. Compared to Vienna or Graz, Salzburg has a moderate size. Business travellers enjoy the proximity to the main station and the airport. If you live centrally, you can take the suburban train or bus or even walk. Alternatively, the cycle paths along the Salzach offer perfect opportunities for cycling. Good to know: There are several busses and trains connecting Salzburg to its neighbouring country of Germany on a daily basis, making the border town of Freilassing an attractive domicile for commuters.

Taking off from Salzburg: Salzburg Airport W. A. Mozart is located in Wals-Siezenheim, connecting the City of Mozart to most major European cities on a daily basis. In addition, various public transport options connect the airport with the airport, main station and city centre.

You’re not looking for temporary housing but would like to offer your apartment for rent? Find out everything about KURZZEiTmiete for lessors!

Find the best accommodations in Salzburg on the fastest way

Short-term living in the Mozart city